Yankee Xpress - December 2016 It is quite obvious what Alternatives, a certain spectacular winged creature that is seen regularly in the Blackstone Valley and Dennis H. Rice have in common. They all soar. 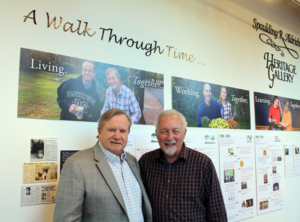 It is quite obvious what Alternatives, a certain spectacular winged creature that is seen regularly in the Blackstone Valley and Dennis H. Rice have in common.

“The heron is on Alternatives’ T-shirts and the company’s brochure (for an annual bike ride) because Dennis is into herons!” Scott Rossiter of Grafton—a former member of Alternatives’ Board of Directors and a longtime friend of Mr. Rice—said the morning of November 26th while discussing the 40th anniversary of the agency, and Mr. Rice’s role in its growth, over coffee at McDonald’s in Whitinsville.

Few people outside of Mr. Rice’s wife Kelley and fourth-grade daughter Quinnlan know the man who has been pointing the way in the treatment of individuals with developmental or psychiatric disabilities locally, regionally and statewide since Alternatives was launched better than Mr. Rossiter.

Although now 71 and looking ahead to retirement within about two years, which will bring to a close an illustrious tenure as Alternatives’ executive director, Mr. Rice’s passion for the work has not waned, Mr. Rossiter said.

Mr. Rice is also forever reinventing the agency—and himself—which is one of his foremost strengths, Mr. Rossiter said. “Ask him about his family. He became a father in his 60s!”

“Very much so,” Mr. Rice acknowledged, during a conversation in Alternatives’ offices on Douglas Road in Whitinsville. “I started my fatherhood career quite late. Having a kid late in life keeps you young and it also proves that you can teach an old dog new tricks!” Besides, he said, “it was sort of the deal” between himself and Mrs. Rice, in a second marriage for him. “She wanted at least one child.”

Sorting through “a long list” of possible names, the Rice’s chose “Quinnlan Alfreda Rice” for their daughter. The “Alfreda” is in honor of Mr. Rice’s mom, who was born in Russia.

With a diverse Board chaired by Mary Ellen Larkin-Root of the Solid Benefits Group of Shirley, Alternatives is in good hands. But replacing a powerhouse like Dennis Rice still won’t be easy, Mr. Rossiter said. “Dennis’ big thing is connecting with the community. That’s what made him so successful at the State House and with fundraising. He is the voice of the organization and he continues to find a new vision.

“This guy started when they trolled the state hospitals to get people into sheltered workshops, employment and individual apartments.” The results in Alternatives’ case have been “phenomenal,” Mr. Rossiter said.

Ruth Donovan, who died in October of 2001, is an example of lives touched by Alternatives’ compassion. Institutionalized at Monson State School in Palmer when she was 11 because of epileptic seizures, Ms. Donovan became one of Alternatives’ first clients. She left Monson in 1976. “(Mr. Rice) got me out of there!” she said.

“It was incredible,” Mr. Rice recalled later. “It was such a simple process to release residents and yet people spent many years, even lifetimes, there. In Ruth’s case it was 33 years. I cannot even imagine how people must have felt. It’s as though the state was saying ʽwe’ve incarcerated you all unjustly. We are sorry. You are free…go!’ And no one said no.”

Cyril Griffins of Maricopa, Arizona, Alternatives’ first Board chair, said by telephone that “there was nothing in the Uxbridge/Northbridge area for handicapped children” when his daughter Donna, now 50 and living in a group setting in California, was born with Down syndrome. “Barbara Hoffman helped me in getting Alternatives started,” Mr. Griffins said. “That’s where the name came from: we wanted to emphasize that we were giving people options. My daughter was not an Alternatives client but she was able to go to school, get involved with a program in Framingham, graduate, learn cleaning and housekeeping.”

Mr. Rice “has been forthright in everything he does and I think he is a master of what he does,” Mr. Griffins said.

Given Dennis Rice’s contributions, “it will be a struggle” for Alternatives to find a capable successor, Mr. Rossiter said. Other nonprofits, including YOU Inc., have found this out. “Moe Boisvert headed up YOU Inc., they’re on their second or third person since he stepped down. Whoever replaces Dennis won’t have the same fire. The Board might decide to bring in a professional manager on an interim basis.”

Michael Siebold, Alternatives’ director of community services and a 37-year veteran with the agency, said “the Board has always thought of an interim person as one option. I would be happy to fill that role” if need be. As effectively second-in-command to Mr. Rice, Mr. Siebold has helped spearhead Alternatives’ expansion. “When I started we had just seven programs, now we have over 60,” he said. “Some years, we doubled in size. There is a lot of excitement about what we’ve achieved. Over time we’ve become more sophisticated with more policies and procedures. We have matured as an organization.”

Another hurdle for the Board, Mr. Rossiter said, is Mr. Rice’s total immersion in the mission. “What makes

Dennis great is also his flaw and that is his attention to detail. He became a micro- manager. He would freak out if we made a left turn in the center of Uxbridge during the bike ride!”

“There is something to” Mr. Rossiter’s contention, Mr. Rice admitted. “I can’t be that to that extent anymore, though.” He notes that perseverance was of paramount importance in overcoming the initial obstacles, when Sharon Ricketts (then executive director) and he were hired at the same time. “We started in a room in a house in Uxbridge,” he said. “It was hot and no air conditioning. There were two desks. There were wasps!”

His focus today, he said, as his career winds down, is “1) to continue to build a strong Board, especially now in transition, 2) programs, Mental Health will be RFP’ing about this time next year” and 3) “advocating with the state to get a fair rate. We haven’t had a real increase up until two years ago, for 20 years.”

“When we started the conditions of institutions were awful. We were warehouses. So we had to improve conditions. We took people out from the institutions and we didn’t know what we were doing. But they said ʽyes get me out of here!’”

Hugely significant too, he said, was transforming the mill complex on Douglas Road into an arts and cultural center with theater productions, outdoor concerts and more (it was, Mr. Rossiter said, literally “a millstone around Alternatives’ neck”). “It used to be our sheltered workshop with over 200 people working there,” Mr. Rice said. “In reality it was just another institution. If you had a disability this is where you came to work. That has been closed for more than 15 years! We preached community inclusion and yet we were isolated. So we created a community treasure. The mill is our best representation of that but our clients also join the woman’s club or help restore a playground in Gardner. We still have far to go to get more inclusive. We want to be liberators.”

In echoing Mr. Rice’s thoughts, Mr. Siebold said “as we became larger we saw the need to give back. That was part of the inspiration for the vision of the mill. To show that no one has anything to fear.”

Mr. Rossiter noted that “too often, founders stay around too long.”

“He probably thinks that of me!” Mr. Rice said, laughing.

No way. Depending on when he departs and moves on to gardening, consulting work and family, it won’t have been long enough so far as Mr. Rice’s many admirers are concerned.