Milford Town Crier - November 2016 What seemed like a typical work day for Jen Rosati and Alexis Morin was anything but on the morning of November 15. And thanks to the two colleagues’ quick thinking, a local resident still has a home to live in. 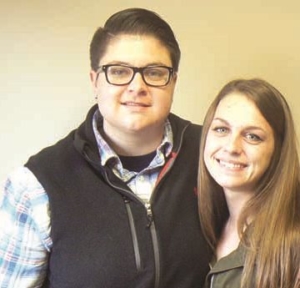 What seemed like a typical work day for Jen Rosati and Alexis Morin was anything but on the morning of November 15. And thanks to the two colleagues’ quick thinking, a local resident still has a home to live in.

On that morning, Rosati and Morin, who work for Alternatives Mental Health Services, had just pulled out of their work place on Asylum St. and were on their way to visit a client. Just seconds into their drive Morin noticed a woman running outside her home with a look of panic on her face. “She had a cast on her leg too,” said Morin. “So the fact that she was running, I knew something was wrong, and that’s when I saw the fire.”

Rosati immediately turned the car around and the two saw flames shooting out of the garage at the Asylum St. home and got out to help. Rosati came upon another occupant of the home outside and moved him out of the way to safety. Morin then helped the owner untangle a garden hose and gave it to Rosati to use while she called 911. “I used to be a volunteer fire firefighter so it was just like riding a bike,” said Rosati of putting out the flames.

Minutes later, the Milford Fire Department showed up to take over and to make certain the fire was completely out. Still, what started as a gasoline fire in the garage on that particular morning could have spread throughout the house if it weren’t for the two women. “From what we could see only the siding on one side of the garage was damaged but it could have been much worse,” said Rosati.

And just like the professionals they are, the two still managed to make it their scheduled appointment and just a few minutes late. Helping people is what these two do for a living. Alternatives, Inc. assists those with psychiatric or developmental disabilities function successfully within the community.

The two agree they were glad to be driving by at that moment to lend a hand. “It’s important to help one another and do the right thing,” said Morin. Rosati concurred. “Don’t be afraid to get involved; it could save someone’s life.”

Milford Fire Chief William Touhey noted the cause of the fire was undetermined but it appeared to have started through a gas grill. He was thankful the two ladies were willing to step in. “It only takes moments for a fire to spread,” he said. “They prevented a small fire from getting big.”