Worcester Telegram & Gazette - December 2017 At age 36, Jon Sarkin suffered a stroke that nearly killed him. Doctors, nurses, hospitals, physical therapists, speech therapists, family and friends all helped him heal. But it was art that saved his soul.

But it was art that saved his soul.

As the critical phase of the stroke passed, Sarkin, formerly a successful chiropractor on Boston’s North Shore, began to feel a compelling need to draw and paint. “The stroke really made me crazy,” he said. “It made art my top priority in life. It made it more important than just about anything.”

In a creative burst, Sarkin threw himself into his artwork, achieving wide recognition for his creativity despite lingering physical challenges. Psychologists have a name for the kind transformation Sarkin experienced: “sudden artistic output.” It is something than can result from brain injury, although documented cases are relatively rare. Sarkin said he had always been interested in art and drew incessantly as a child, but what before had been merely an avocation was now an all-consuming passion.

As he avidly honed his artistic skills, his reputation grew. Sarkin’s art has been featured in The New Yorker, The New York Times, GQ, ArtNews, the Metropolitan Museum of Art and the deCordova Sculpture Park and Museum, among others. 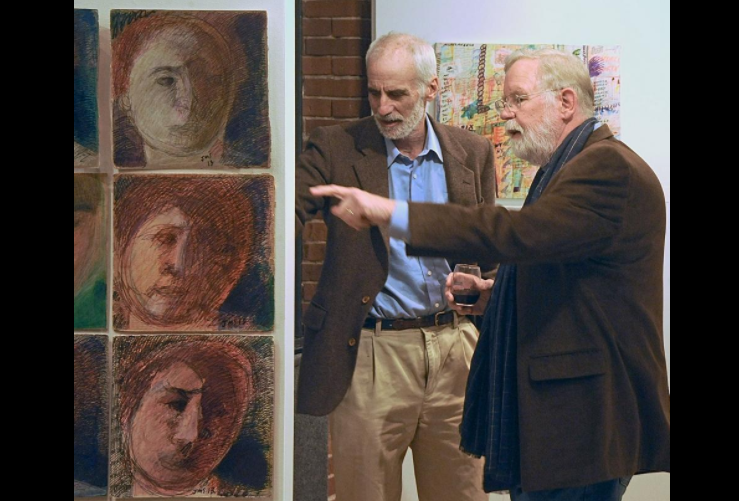 Sarkin’s work is on display in the Heritage Gallery at Alternatives, 50 Douglas Road, Whitinsville. The show, called “Unchained Brain,” runs through Dec. 29. Previously, it was at the Open Door Gallery at the Worcester Art Museum.

Alternatives provides services to adults with developmental or psychiatric disabilities with more than 60 programs throughout Central Massachusetts. The Heritage Gallery is in Alternatives’ main office in the former Whitin Machine Works. The repurposed mill also includes the Singh Performance Center. Programs at the gallery and performance center are run through the ValleyCAST arm of Alternatives, which also hosts a summer concert series and the Worcester Shakespeare Festival.

“One of the things we try to accomplish through providing events is that people of all abilities can come together, and when they do their differences melt away. They’re just simply there to enjoy a concert or a play together,” said Cristi Collari, director of community outreach at Alternatives. 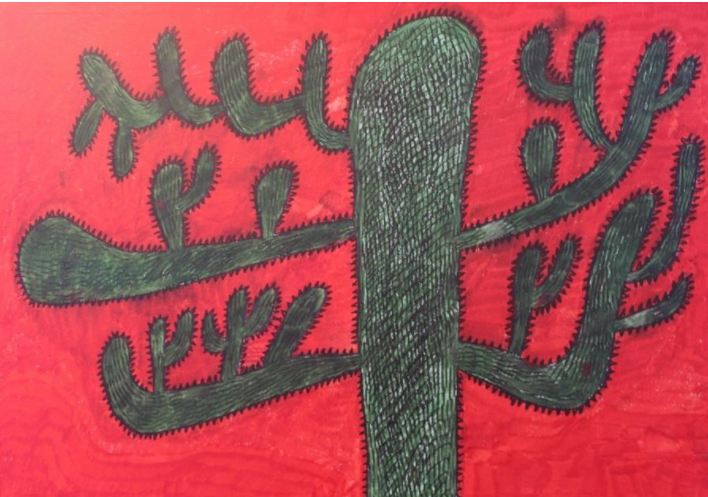 Exhibitions in the Heritage Gallery feature artists who have disabilities as well as those who do not. Area artists are shown, although some have come from places father away, including Connecticut, Rhode Island and New York. “We show all levels of ability within art making,” Collari said. “We have some people who are just beginning and want to participate in an art event and people who are renowned artists.”

Sarkin falls into the latter category.

His story is so compelling that Pulitzer Prize-winning author Amy Ellis Nutt released his biography, “A Shadow Bright As Glass,” in 2011, and Tom Cruise’s production company has bought the rights to his life story. Boston-based alternative rock band Guster commissioned Sarkin to design the cover of their album “Easy Wonderful,” and he also has done a music video with them.

Autographed album covers, including one Sarkin signed for Guster lead singer Ryan Miller, are part of the display at the Heritage Gallery, a touch that is especially pleasing to Allie Ohman, executive assistant at Alternatives. “When I found out that they had worked with Jon, I was like, Wow that’s really cool,” she said. “I was really excited to see that he was coming here.” After Ohman put a notice about the show’s opening reception in October up on Facebook, the event drew Guster fans, including some from out of state, she said.

The bright, colorful drawings and paintings that make up most of the show give a good overview of Sarkin’s intense, eclectic style. Intriguing faces populate grids in an ode to symmetry, which Sarkin says he is “fanatical” about. Each one comprises one face repeated over and over with only slight variations in expression that nevertheless completely change its look.

Some of the works are highly detailed and richly overlaid with color, scrawled words and pop-culture images. Others are arrestingly simple — a single cactus plant or bottle, for example. But it isn’t just a plant or bottle when Sarkin draws it. Instead, the images, especially the bottle, have a restlessly vibrant quality that gives them the sense, almost, of just having manifested from some sort of primal energy field, like they are here for the moment but may disappear in the next.

The model for the bottle was a San Pellegrino water bottle friends who own a café across the street from Sarkin’s Gloucester studio often bring him. The work, a field of green of greater density in the center than on the edges, has the word “bottle” written on it, a limiting touch that intrigues the artist.

“If you looked at the thing and it didn’t say ‘bottle,’ you could figure it might be something else,” Sarkin said. “But once it says ‘bottle,’ you’re locked in. Let’s say you did a painting where it was just brush strokes and just a field with different shades of white, like a big abstract color field. Let’s also say you added some words and it said ‘snow.’ All of a sudden you’re locked in — it’s not milk anymore, it’s not a close-up of a polar bear, it’s not something like that. It’s snow.”

So, what is he trying to show by labeling it “bottle?”

“I don’t know. What do you think I am?” he says, before adding that he had been drawn to a can of paint he had in an otherworldly green color, some of which he used on it. If a color and a beverage break provided the inspiration, the execution of that and all of the work that now receives such acclaim is the result of sheer persistence in the face of frustrating physical limitations.

His artistic interests have not changed much since his stroke in 1988, but his ability to translate the things he thinks about is more advanced now.

“If I saw a picture of someone that I thought I’d really like to draw, (back then) I didn’t have the hand/eye coordination that it takes to draw it, but now I do,” he said. “I realized the ability to draw like that, I just have to be patient and also have the faith, too, that if I just keep working on this it’s going to be really cool.”

His work looks effortlessly free flowing, vivid and engaging, like he just spontaneously put what was in his mind down on paper — et voila. But that sense of ease results from years of hard work. “Things like the bottle, it comes out really cool because I spent thousands of hours doing stuff like that so now I’m able to do something like that that doesn’t take me thousands of hours,” he said.

Just walking into the Heritage Gallery, which serves as an entryway into the Alternatives offices, you are instantly uplifted by the radiant colors and bold images of Sarkin’s work. “Everyone comes in and sees these bright colors and these fun shapes and designs, and it’s definitely different from what we’ve had recently in the gallery,” Ohman said.

That’s the kind of reaction Sarkin hopes people take away from looking at his art. “What success means to me is, when I do a piece and you look at it, and you’re like, ‘This is what it feels like to be alive. This is my experience of being alive.’ I thought the pieces in that show met that criterion,” Sarkin said.

Collari said that, for Alternatives’ clients and the general public as well, the show demonstrates that we all have something valuable to contribute to society whether we have a disability or not. “Sarkin’s story is so important because not only did he suffer a life altering brain injury, but he figured out a way to work through that,” she said. “He was reinvented by his experience and he figured out a way to move on and contribute something of value to society.”

Gallery hours are 8:30 a.m. to 4:30 p.m. Monday through Friday and evenings and weekends by appointment. For more information, call (508) 234-6232 or email Cristi.Collari@AlternativesNet.org.