Four Star Review - Newcomer's 'All Bark' has plenty of bite

The Worcester Telegram & Gazette - June 2016 “All Bark, No Bite” is being billed as a “workshop presentation,” but it signals the arrival of a major new talent that deserves a stage beyond the confines of Central Massachusetts.

NORTHBRIDGE — Kara Emily Krantz began writing “All Bark, No Bite” two years ago. It began as a “random idea” in her head that has gone through numerous revisions, months of rehearsal time, and was even fine tuned during its opening weekend, under the banner of Krantz’s new theater company, Becoming More Productions. “All Bark, No Bite” is being billed as a “workshop presentation,” but it signals the arrival of a major new talent that deserves a stage beyond the confines of Central Massachusetts. 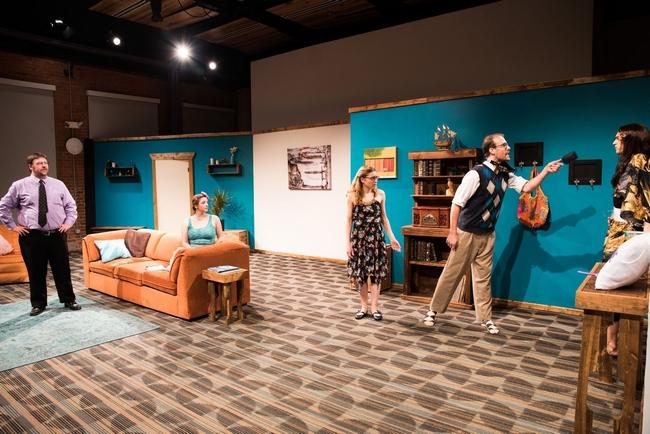 “All Bark, No Bite” is a sui generis bolt out of the blue, a romantic comedy about relationships that upends the tired conventions of that well-tread genre with an inspired twist that will become evident some 20 minutes into the play, with a deft visual clue here, a bit of dialogue there. Once that’s out of the way, you can just sit back and marvel at how Krantz’s superlative cast, one that went through a proverbial boot camp of rehearsal, revision, and collaborative input, embraces Krantz’s singular vision with unbridled passion. The result is a modern day screwball comedy with a generous heart at its center. It’s the equivalent of a collaborative hybrid between Preston Sturges and Frank Capra.

To divulge even a thumbnail synopsis of the intricacies of the plot would be akin to writing a revelatory critique of a cleverly crafted murder mystery, but Krantz tantalizingly teases us immediately with what just exactly is the true nature of the live-in relationship between Charlotte (Vivian Nichols) and Eugene (Wade Porter). When the visiting Robert (Sean Costello) shows up at their home, Charlotte shifts her affection to him without a blink of an eye. Is Charlotte living with one man (Eugene) and seeing another (Robert)? Before you have sufficient time to theorize over the complexities of the situation, Robert introduces Bella (Michelle England) to everyone and you know exactly what’s going on. It’s a delectable conceit and one that works so beautifully, you’ll be applauding at just how a once “random idea” has lead to this utterly ingenious, endearing, uproariously funny, slyly written, giddy, witty and impeccably acted gem of a comedy.

It’s obvious that Charlotte and Eugene love each other. It’s obvious that Robert and Bella love each other. In fact, Bella seems to have a particularly slavish passion for Robert. So why is Charlotte dividing her affections between Eugene and Robert? And why is hyperactive Bella suddenly all over the repulsed Eugene like a teenage girl? One can understand why Eugene isn’t fond of Robert, the threat to his domestic tranquility. No doubt you’re perspicacious enough, as a reader of this review, to speculate on the deliberately excised specific dynamics going on between these characters, so let’s concentrate on the delightful accomplishments of the actors, while offering a bit of informational misdirection along the way.

Charlotte and Eugene have a very ordered, pleasantly sedate relationship. The intellectually embroidered, argyle-wearing Eugene contents himself with Sudoku and crossword puzzles, his personality defined by urbane arrogance and territorial gruffness, an old soul trapped in a young body. He’s very protective of Charlotte, and as a creature of habit and routine, is resistant to change of any kind. Porter, like everyone in Krantz’s terrifically cohesive cast, inhabits the role with marvelous specificity, infusing Eugene with a lovably grumpy, anal retentive, needy, possessive persona. And in the scheme of things, those are exactly the traits that the role calls for. Nichols does an impressive job of showing us how emotionally fragile the commitment phobic Charlotte is, trying so hard to make everyone “like” each other, while facing up to her own vulnerable state of heart.

Costello traffics through the emotional minefield he’s stepped into with excellent aplomb, interpreting Robert with a sort of embarrassed, frustrated anxiety. You will want England’s adorable, irrepressible Bella to jump into your lap. It’s a performance of astonishing physicality and emotional voraciousness. England and Porter’s scenes together alone are worth a trip to Whitinsville and the price of admission, a risible demonstration of opposites not quite attracting. And then there’s Peter Arsenault’s indelible turn as Suzanne, the transgender next door neighbor. In a performance that is exquisitely rendered, staying on the right side of caricature without sacrificing a well-deserved laugh, Arsenault also injects some lovely pathos into the role, making a timely statement about sexual identity. In a play that is all about the risks and rewards of relationships, Suzanne plays an important part in showing us how initially negative perceptions can change into positive ones.

Dave Plante and Joel Novak’s set design, a sprawling living room cluttered with sofa, pillows and knickknacks galore, is a perfect playground for everyone to romp around in. You owe it to yourself to see this splendidly entertaining achievement.