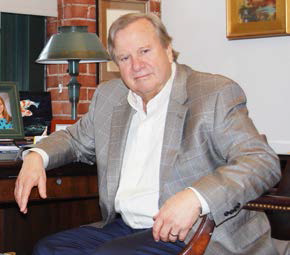 WHITINSVILLE — Forty years ago, Dennis Rice began a crusade to provide critical skills and support to individuals with developmental and psychiatric disabilities.

Fresh out of Alma College as a theatre major, Rice, a conscientious objector during the Vietnam War, was asked to serve in the psych unit at Cambridge City Hospital. One of the striking things that he noticed during this time was that people would come in quite disoriented and unwell, and after a few short weeks of treatment would be discharged, only to return back again.

"Early on in my career, I really saw the need for services to support these individuals in their own community so that they didn’t have to return back to the hospital." Rice said.

Shortly after Rice’s time in Cambridge, the Commonwealth of Massachusetts was sued to improve the conditions of state institutions through a class action lawsuit and to begin to fund new, community-based services that would provide a place for individuals to go after being discharged from state institutions. Rice partnered with Sharon Rinkus … and Alternatives was born.

"We began as two residential programs and one apartment program based in Douglas, Milford and Medway, and for the next 15 years, the State of Massachusetts began emptying institutions, creating a dire need for more community-based programs, which naturally helped in the expansion of our programs," Rice said.

Since founding Alternatives in 1976, Dennis Rice has remained steady in his pursuit of providing individuals real opportunities to become valued members of the Blackstone Valley community, and beyond.

"Our mission has come down to three words — skills, support, success," he said. "We help provide individuals with the skills or the support to be successful and satisfied in their own life."

Over the last 40 years, Rice has helped hundreds, if not thousands, of individuals.

"It’s a terrible thing, but in the 30's, 40’s and 50’s, if you had a disabled son or daughter, you were encouraged to institutionalize that child. We’ve served people who had been in that kind of environment since they were babies, and many times, living in that kind of isolated and sometimes horrific condition, they came out more disabled."

Rice and his counterparts in the mental health community worked tirelessly over the years to "rescue people that had been locked up for not very good reasons, and bring them back to the community from which they came, so that they could get back into the mainstream, and have a job, or have a friendship."

He went on to say: "That is why we started Alternatives, and it’s probably the most meaningful thing that we have done."

"We like to say that we help 1,200 people start each day with a personalized plan to improve their lives," he said.

With more than 725 staff members, Alternatives receives most of their funding from the Commonwealth, however, Rice noted that donations and fundraising are critical to help fund the vast number of day programs, and also increase the quality of life for individuals in the residential programs.

"Our biggest event is the Valley Friendship Tour, which last year raised over a quarter million dollars," Rice said.

As the leader of an amazing staff, Rice strongly believes in the important work that they accomplish on a daily basis.

"They are supporting some of the most vulnerable members of the Commonwealth," he said. "It’s honorable work, and what they give to the individuals they serve is the gift of significance, that they can truly make a difference in someone’s life. And they do, every day."

He went on to say that sometimes the progression is small but his staff members are always providing individuals with hope.

With his theatre background, Rice has also brought the arts and culture to the Alternatives community by offering an art gallery, artisan studio spaces, and a theatre, within the mill that houses the Alternatives executive offices. Additionally, ValleyCAST, a non-profit subsidiary of Alternatives, facilitates cultural activities such as art exhibits, concerts, plays and other events that bring people together.

Part of the tremendous success of Alternatives, are the volunteers who donate their time and talents to help individuals build successful lives.

"We would love to have more volunteers from the community to take part and have a relationship with the people we serve. Even if it’s just to go have a cup of coffee once or twice a month, or shoot some baskets, or take a walk together," Rice said, adding that volunteers at Alternatives gain satisfaction knowing that they are making a tremendous difference in someone’s life.

The future is bright for Dennis Rice. He recently received an award honoring him for his many years of service to the community. Alternatives Board Chairman Mary Ellen Root described him as "a visionary and an innovator." He looks forward to continuing to innovate and improve the lives of the individuals served by Alternatives.

"One of my goals is to continually assess the outcomes of the programs, to ensure that not only are we being efficient with the funding, but also effective in truly improving the quality of life of the people we serve," he said.