Pilgrim’s ‘Big Meal’ a feast for the heart 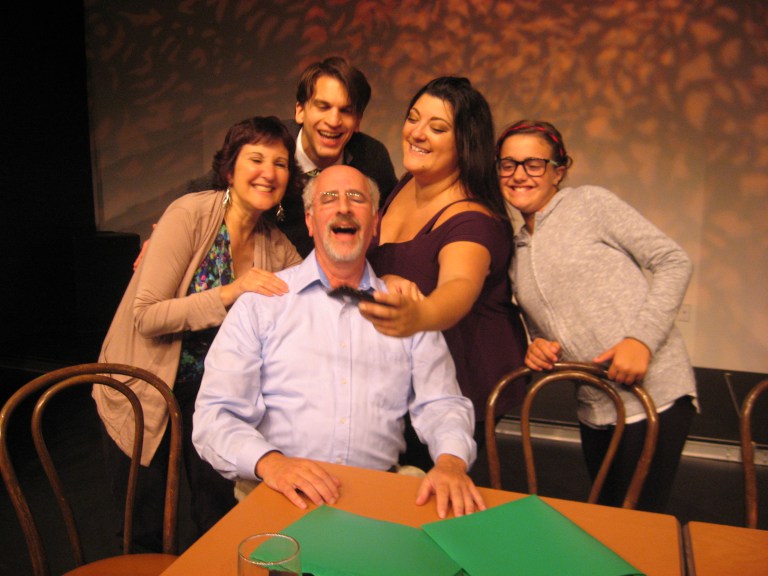 NORTHBRIDGE — Dan LeFranc’s “The Big Meal” is a brazenly ambitious, tumultuous, multigenerational snapshot of how fleetingly life goes by. By turns uproariously funny and deeply moving, it’s yet another impressive capstone in Pilgrim Soul Productions’ theatrical legacy. At the Singh Performance Center in Whitinsville on Friday night, director Matthew J. Carr and his cast brought high-wire precision to LeFranc’s take on love, marriage, parenting, birth and death. Covering five generations of family life in a remarkably compressed, intermission free 90 minutes, “The Big Meal” somehow manages to feel both intimate and expansive. It’s a domestic epic seen through the lens of a telescope. Blink your eye, and the couple playing the meet cute and dating version of Nicole and Sam (Haneen Jaara and Alex Wersted) have suddenly aged into the married version played by Lexi Meunier and Peter Arsenault. And as the years and decades go by, Sam and Nicole will be enacted by Cindy Bell and Jim Douglas, but not before Bell and Douglas have a go at imparting Sam’s parents. Confusing? Not really. Trying to comprehend the complicated cast/role listing in the playbill will come into reasonably lucid focus as the play unfurls onstage. One must be willing to suspend one’s belief at the often discernable lack of age difference between those playing parents and those representing young adult children, but it audaciously yields moments of amusing sibling rivalry, mildly obdurate teenage rebellion, and blistering family discord. The accelerated, insistently forward momentum of the play holds your attention rapt, lest you miss a year or two in the lives of Sam, Nicole, Sam’s parents (Robert and Alice), their children (Robbie and Maddie), grandchildren (Sammy and Jackie) and great-grandson (Matthew).

It’s a family tree with numerous branches, and everyone in the dexterous cast multi-tasks in portraying those branches as they grow older. Wersted and Jaara bring a charming cacophony to their restaurant scenes as the youthful Sam and Nicole, firing overlapping dialogue at each other with terrific veracity. Nicole is a waitress, and she adamantly resists Sam’s flirtatious advances with “I don’t really want to know about your life, and I really really don’t want you to know about mine.” This initial commitment-phobia later gives way to Sam (Arsenault) pulling out a ring, inducing Nicole (Meunier) to gasp, “Don’t you think I should be wearing underwear for this?”

Before you know it, they’re embracing their children, played with a fine touch of petulant misbehavior by Samantha Atkins and Aran D. Paquin as the youngest edition of Maddie and Robbie. As Maddie and Robbie grow up and life gets serious, they are portrayed by, first, Jaara and Wersted, then Meunier and Arsenault. And to their credit, the transition is made with plausible conviction by everyone. Meunier and Arsenault also bring a palpable marital tension to their turns as Nicole and Sam, especially when their marriage is going through a rough patch.

Douglas and Bell bring excellent, differentiating qualities to their roles as Sam’s parents, and later to the elderly manifestations of Sam and Nicole. As Sam’s father, Robert, Douglas plays him with humorously candid, sometimes tactless bluntness, while Bell’s warmly benevolent Alice tries to put a happy face on the family chaos with the help of her California martinis. It’s a stark contrast to their take on the aged Sam and Nicole, who are far from that vibrant couple of decades ago. Along with the headlong rush of time moving inexorably forward, LeFranc slows things down now and then with moving, stately introspection, and it’s particularly heartbreaking in the twilight poignancy that Bell and Douglas bring to the table, literally and figuratively, as Nicole is coping, with fearful denial, at what has become of her forgetful husband. The mascara running down Bell’s cheeks speaks volumes.

Alan Standrowicz’s freely adaptable set design, comprised of tables and chairs, and an intricately patterned back wall, is bolstered by Timothy D. Carr’s mood-shifting lighting design. Needless to say, death is inevitably as much of a character here as anyone else, and it strikes in both expected and unexpected ways, by way of a dinner served up by Cynthia A. Nardella Ciullo. Avoid that meal as long as you can, but by all means feast yourself on the resonant pleasures of this richly original work.