Worcester Business Journal - June 2017 After a 20-year wait, Quinsigamond Community College is expanding into the Blackstone Valley with two initiatives.

After a 20-year wait, Quinsigamond Community College is expanding into the Blackstone Valley with two initiatives. 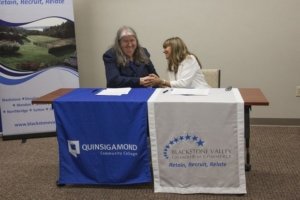 The college on Monday announced the launch of a new internet learning cafe at Alternatives Unlimited, Inc. in Whitinsville, where students, clients and Alternatives employees will be able to use WiFi, grab coffee, and take online classes through QCC, according to a press release. QCC's total investment in Alternatives is $33,357, according to data from the college.

QCC also signed a memorandum of understanding (MOU) with the Blackstone Valley Chamber of Commerce for an advanced manufacturing training program. Under the agreement, QCC will provide 30 computers, 20 of which will have computer-aided design capabilities, and various classroom furniture to an instructional center on Linwood Avenue in Whitinsville. The college will also ask for $20,000 from its foundation to renovate the space, according to the MOU. In total, the Chamber will get $134,143 in financial support from the college, not including the foundation money.

The MOU is the first step towards getting a manufacturing center in the Blackstone Valley, said chamber President and CEO Jeannie Hebert.

"This is a long time coming, and is one of the number one initiatives that we have been working to accomplish," said Hebert.

Quinsigamond has looked into expanding into the Blackstone Valley for years. In the fiscal 2015 state budget, the college received $300,000 to establish a satellite campus there. When the news of the cyber learning center came out, seven state legislators sent a letter to QCC President Gail Carberry, saying they were concerned that money was being used for the cyber learning center rather than a satellite campus.

Upon further review, however, it turns out there was a misunderstanding and funds were not misused, according to QCC and the office of State Sen. Michael Moore (D-Worcester). According to QCC, $216,830 of those funds were invested in the Blackstone Valley and $83,405 was returned to the state.

More than 700 QCC students come from the Blackstone Valley, and about 200 of those students take online courses, according to the college.