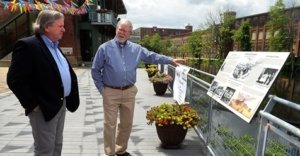 Dennis Rice and Harry Whitin at one of the Heritage Panels

Unlimited Inc., tells the story about the evolution of an industrial empire and parallels those changes with 200 years of history in treatment of people with mental disabilities.

The panels line a plaza overlooking the Mumford River, outside mill buildings housing Alternatives’ administrative offices and employment center, the Singh Performance Center and affordable apartments for people served by the organization.

“What I thought was really interesting is institutions have life cycles,” said Harry T. Whitin, chairman of Blackstone Heritage Corridor and a seventh-generation descendant of Paul Whitin, whose family built the world’s largest textile machinery manufacturing company and other industries.

“When we moved from farms to factories, the notion of taking care of people with disabilities in the home started to fade, too,” he said.

Blackstone Heritage Corridor provided a grant to Alternatives for the project.

“We’re very proud that we took the time to appreciate the buildings we occupy,” said Dennis H. Rice, executive director of Alternatives.

Readers follow the Whitin manufacturing empire from Paul Whitin Sr.’s start as a blacksmith and construction of the 1826 brick mill as a forge, which is now apartments; to expansion of mills throughout the region; to paternalism and constructing civic buildings and parks for residents in the company town; to the rise of unions and the departure of Whitin companies by the late 1970s.

Simultaneously, one tracks the move from almshouses to institutions for more humane care, including establishment in 1833 of the Worcester State Lunatic Asylum, the first public mental health hospital in Massachusetts; to warehousing veterans with post-traumatic stress disorder, people with alcohol-use disorder or dementia, and children with disabilities in institutions; to opening community clinics in the 1960s and closing institutions in the 1970s.

The Blackstone River Valley National Historical Park, particularly Whitinsville’s place in it, “has the danger of becoming a drive-by unless you develop things like this,” Mr. Whitin said.

“Dennis has turned this into a true community treasure,” he continued. “Adding the signs is the frosting on the cake: Why Whitinsville is here and why Alternatives is here. The signs tell how the two merged.”