Those of you who attended the free performance of Worcester Shakespeare Company’s “As You Like It” at the Worcester Common Oval Wednesday night should count your blessings, since it appears that Mother Nature may have an undue impact on the encore scheduled for tonight.

But fear not Bard enthusiasts. Artistic director Mel Cobb’s swooning, utterly captivating production of this tale of multiple star-crossed lovers makes its official bow on the outdoor Napkin Stage at scenic Whitin Mill in Whitinsville Friday night, where it will run concurrently with “King Lear” until Aug. 21. 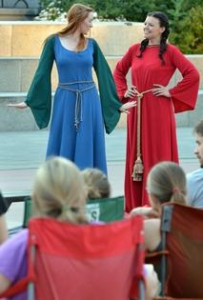 Cobb had some trepidations about staging “As You Like It” in a less controlled outdoor environment, where the public elements of downtown Worcester could affect the production in unforeseen ways. Despite the occasional roar of passing motorcycles, and the temporarily insistent blare of a car alarm, director Annie Pluto and her cast gifted Worcester with an utterly charming piece de resistance that cajoled one’s spirits under the canopy of a dusk to satin black gently breezy sky.

Even the moon had to smile at this merrily convoluted confection of love’s wayward destination to its neatly wrapped conclusion.

At the center of it all is Rosalind (Allie Croker), the daughter of the banished Duchess Senior (convivially imparted by Schuyler Evans), who has been usurped of her power by her sister, Duchess Federica (a nicely malevolent Sarah Morin).

Pluto has discarded convention by casting Evans and Morin in roles originally written as Duke Senior and Duke Frederick, but it results in an intriguingly feminine perspective on the sibling power struggle.

And the sibling rivalry doesn’t stop there. The recently deceased Sir Roland de Bois had instructed his oldest son, Oliver (Jordan Greeley), to take care of his younger brother, Orlando (Ryan Cashman), and to ensure that he receive the education, training and property he’s entitled to. Rather than comply with his father’s wishes, Oliver plots to have a wrestler in Duchess Federica’s court, Charles (Robert Fetterman), pummel Orlando in a match.

It matters not that Charles begs Oliver to get him off the hook, fearing that he will lose favor with the court, since Orlando beats him handily. Federica impulsively banishes Rosalind from her court after the wrestling match, but not before Rosalind falls instantly in love with Orlando.

In contrast to the courtly dynamics is the pastoral setting of the Forest of Arden, where Duchess Senior has taken up residence with her loyal entourage of courtiers, including the ballad-singing Amiens (Emma Romasco), and the melancholy, anti-social Jacques (Chris JM Maloney), who avoids the Duchess by taking up a curious interest in Touchstone (Vincent Viezzer).

Touchstone is a clown in Federica’s court, who has fled to Arden with Rosalind and Rosalind’s cousin, Celia (Briana Lynn Naughton), who infuriates her mother by joining Rosalind in exile.

In a play bursting with Shakespeare’s customary romantic symmetry, there are couplings galore. When Federica orders Oliver to find his brother, and is saved by him from a serpent in Arden, he falls in love with Celia. Orlando’s faithful, ravenously hungry servant, Adam (Christopher A. Gates), falls for a shy shepherd girl, Audrey (Ava Rose Molnar). Silvius (Evan Crocker) pines in vain for the sultry Phebe (Romasco), who has eyes for Ganymede, who isn’t even a boy.

In her quest to test Orlando’s love for her, Rosalind disguises herself as a boy, Ganymede, and takes it upon herself to teach Orlando the art of wooing. One could easily rename the play “Much Ado About Love.”

Croker, who is based in London, is simply splendid, beguilingly coquettish as Rosalind, and emotively dazzling as the contriving Ganymede. You can practically see the mischievous gears spinning in her head, as she renders Cashman’s endearingly enacted Orlando dizzy with amorous contemplation. She is the Artful Dodger extraordinaire, in a thrillingly inventive tour de force.

Vying with her for acting prowess is Viezzer’s verbally acrobatic turn as Touchstone, who bawdily, and delightfully, criticizes and ridicules the besotted souls surrounding him. Most besotted of all is Crocker’s hilarious take on the frustrated, heartbroken Silvius, sprinting around the contours of the Common Oval to vent his pain.

Maloney, a Worcester Shakespeare Company regular, has a gift for summoning up deadpan comic melancholy, a la Buster Keaton, in his portraiture of Jacques. Lynn Laughton invests the role of Celia with fine, cultivated empathy. Romasco warbles beautifully as Amiens, and tortures exquisitely as Phebe. Cashman and Greeley play the two sides of the male ingénue coin quite effectively. Gates makes for an amusingly weary but devoted Adam. Tony Ferreira will play the role twice, performances yet to be determined.

Lori Rabeler’s costumes are authentically spot on. Rose Molner’s choreography, and Romasco’s music direction, embroider this enchanting production with a minstrel touch that would earn the Bard’s seal of approval. It’s an exultant ensemble success well worth a trip to Whitinsville.