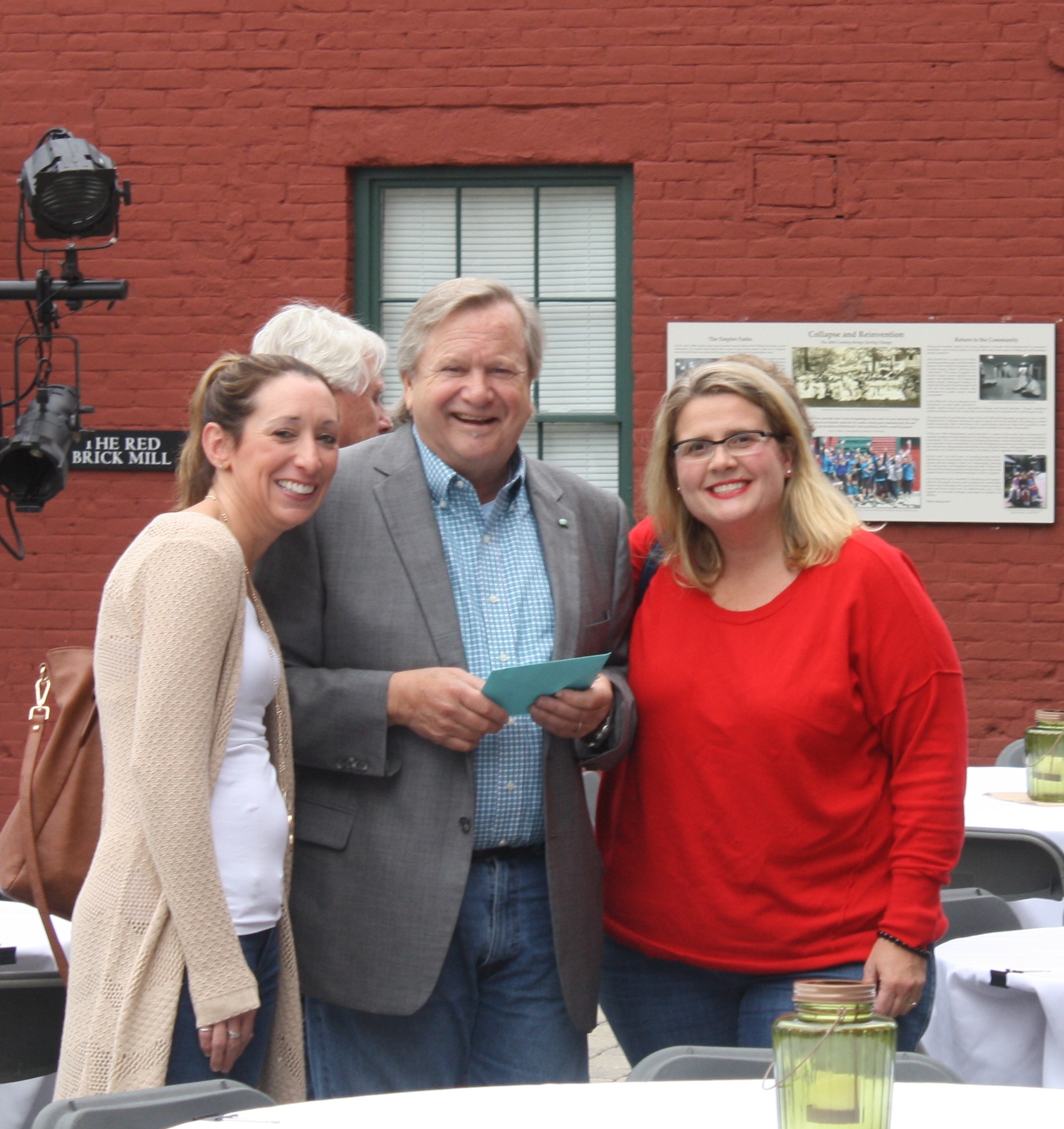 In considering the various ways they might pay tribute Dennis H. Rice as he moves on from his position as founder and executive director of Alternatives to “a new adventure,” colleagues decided an early-fall barbecue and reception seemed most fitting.

Indeed it was. As was the location.

With rainy skies having yielded just in time, some of Mr. Rice’s many associates and friends gathered on the outdoor plaza behind the Alternatives Whitin Mill on Douglas Road in Whitinsville the afternoon of September 28th to say “thank you” to him for the forty-two years he has given to the organization. There was sufficient reason for such a celebration, which featured food and drink, music by the trio of Ken Taylor, Bob Dick and Tim St. Jean, a video, remarks by several speakers and plenty of commiserating. Driven by Mr. Rice’s vision, Alternatives, after all, has proven to be nothing less than a godsend in providing residential and vocational assistance to people with developmental or psychiatric disabilities.

Mr. Rice launched Alternatives in 1976 with just three programs serving twenty-six individuals. Today, as the result of a recent merger with The Bridge of Central Massachusetts, the new entity—Alternatives and The Bridge—boasts a combined workforce of more than 1200 and over $82 million in assets. Over the years, Mr. Rice has pioneered the implementation of the rehabilitation teaching approach to both settings in which Alternatives focuses its attention (residential and vocational), and piloted aspects of the innovative technologies used by the Center for Psychiatric Rehabilitation at Boston University and the Bureau of Child Research at the University of Kansas—with which he established affiliations.

He has given presentations throughout New England, the Midwest, Canada, New Zealand and Australia. These aside, his strongest quality may be his easy rapport with the clientele Alternatives serves, and with his fellow professionals in Central Massachusetts and beyond—all the way to the State House. He is not only highly regarded for his intelligence and passion for the work but for his good-natured, fun-loving disposition.

Mr. Rice will remain as a senior advisor to President/CEO Ken Bates. He will no doubt be consulted frequently for the expertise only he can offer. Under his leadership, the Alternatives complex next to the Mumford River has been handsomely upgraded. It has also been transformed into a destination for residents of the community to enjoy local events, to view artwork in a gallery environment and to view stage productions. To no one’s surprise, Alternatives-The Bridge, in collaboration with Lowe’s and students from Valley Tech, has now undertaken a renovation of a farmhouse and greenhouse on land it owns beyond an accessory parking lot slightly southwest of its main, attractive set of buildings.

In responding to an observation that Mr. Rice’s shoes must be “tough to fill,” Mr. Bates smiled and said “I don’t look at it as a replacement [scenario]. Dennis will still be involved because we need to keep expanding our connections to the community.” Mr. Bates said he views the moment as “let’s go, don’t slow down.”

Ken Taylor, arguably the best bass player for miles around, echoed the thoughts of all of those in attendance as he began setting up for his role in the proceedings by saying “Dennis has been a supporter of mine starting years ago in Plainville. He is a silent partner in the arts community and I respect him for that.” When he was with the Northbridge Recreation Commission, Mr. Taylor said, “Dennis helped me get the town’s summer concert series started. Look at what this place has become. It was a broken-down mill.”

Michael Donovan of Metaphor Marketing in Worcester said that “Dennis gives proof to the idea that one man, one woman, can make a difference.”

Chris Gates, who is with Worcester’s Shakespeare Company, and who contracts with Alternatives to run productions in the G.B. and Lexi Singh Performance Center, said Mr. Rice “has expanded the footprint” of Alternatives “tremendously.”

“Night of the Living Dead,” a Braid Productions’ play, starts October 12 and continues almost to the end of the month.

With offices in Whitinsville, Milford, Leominster, Wrentham and Worcester, Alternatives-The Bridge is a reflection of Dennis Rice’s dream of what a human-services provider can be.

“It was really nice,” Karen Goldenberg, Alternatives-The Bridge’s director of marketing and development, said, of the three-hour event. “It took a lot to put it together. Ken Bates, Dave Bunker, Mike Siebold (director of community services and a thirty nine-year employee of the organization himself) and Dennis’s wife Kelley Gamble all spoke. There was a little skit. Also, Ken Bates unveiled a plaque that will go on the plaza, which is being renamed The Dennis H. Rice Community Plaza.”