The Bridge Honors Founders and Former Board Members

On September 21, The Bridge of Central Massachusetts unveiled four portraits on the Wall of Honor at the 4 Mann Street headquarters at a breakfast event. 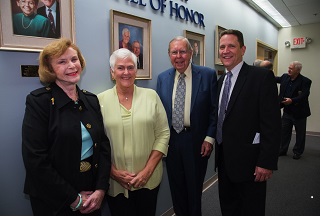 Among those honored were:

The Honorable John McCann and Mrs. Suzanne McCann -- The McCanns have been supporters of The Bridge for more than 45 years. John is a founding Incorporator and former member of the Board of The Bridge of Central Massachusetts. He served on the Board of Trustees for twenty years until becoming a Judge in the Superior Court of Massachusetts. Suzanne served as a trustee for close to a decade beginning in 1996.

Anne and Felix Cataldo, MD (posthumously) Anne and Felix were strong supporters of The Bridge. Anne served on the Board of Trustees of CTC from 1990 to 1996 and then served on The Bridge of Central Massachusetts Board until 2014. During her tenure she served as President and Vice President of the Board and served on the Development Committee until her passing in 2015. She and her family contributed countless hours of volunteer time and resources for Bridge events and activities. Felix was a surgeon in Worcester for 52 years until his passing in 2005.

Barent Walsh, Ph. D. In 1973, Barry founded Community Treatment Complex (CTC) and served as Executive Director. In 1996, CTC merged with The Bridge of Central Massachusetts and Barry became Executive Director of the new organization. Under his leadership, The Bridge grew significantly and became known for providing evidence-based practices. In 2015, he stepped into the role of Senior Clinical Consultant and Executive Director Emeritus. He is an internationally-known expert on self-injury and suicide.

Nita and Dick Holt (posthumously) Nita and Dick were long-time supporters of The Bridge and were instrumental in the siting and operation of a Bridge children’s program across the street from their home in Westborough. Nita joined the Board of Trustees in 1990 and was honored in 1998 as “Trustee of the Year”. She served as Board Secretary, a tutor in the Bridge Children’s home and was a member of The Bridge Newsletter Editorial team until her passing in 2015. Dick was President of the Research Division of Weston Observatory and co-founded and consulted for several geophysical engineering companies. He passed away in 2012.

During the event, Bridge President and CEO Ken Bates provided an update on The Bridge today, noting that he recently celebrated his one-year mark as CEO of the agency. In 2015 he became President and CEO after Barry Walsh, Ph.D. stepped into the role of Senior Clinical Consultant and Executive Director Emeritus.

Senator Harriette Chandler also spoke during the event, noting the importance of support for the human service sector and pledging her continued efforts to advocate for additional funding for children’s mental health and human services.

The event also marked the start of a new Corporators group which will meet several times a year. The role of the Corporator is to serve as an ambassador, bringing information and feedback from the community to The Bridge and vice versa. They are elected by The Board of Directors and serve five-year terms.